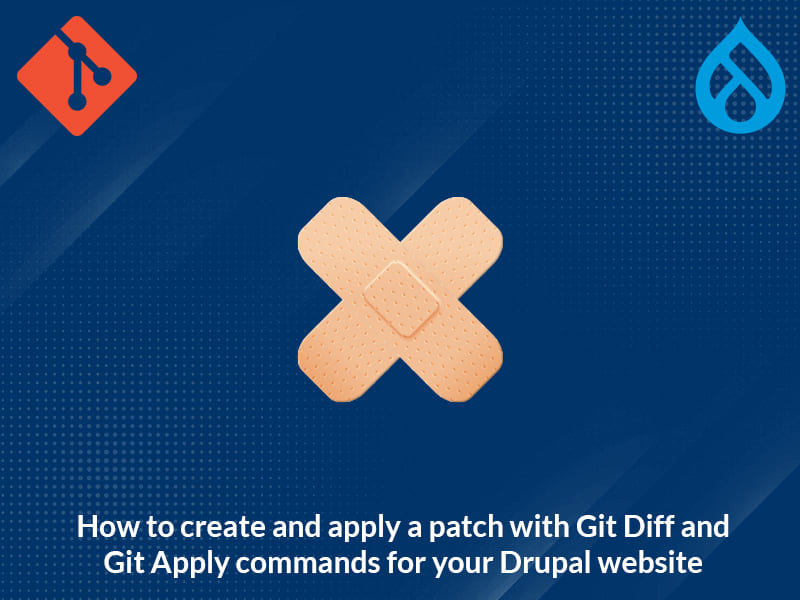 How to create and apply a patch with Git Diff and Git Apply commands for your Drupal website
Akshay Devadiga
24 Jan, 2023

Git has been a reliable version control tool for a large number of closed and open-source projects. With Drupal being an extremely collaborative open-source content management framework, a trackable, transparent, and distributed version control system like Git is a perfect fit. Git replaced a long-time version control partner – CVS – in early 2011 and became every Drupal developer and contributor’s favorite tool for its security, distributed nature, agile workflow, and of course, being open source!

If you’re a Drupal developer, you should be familiar with patches already. Patches are like band-aids. They are small pieces of code that are added on top of already existing code files to support it or fix any issues. Different types of patches include bug fixes, security vulnerability fixes, performance enhancements, styling fixes, etc. If you are a regular contributor to the Drupal project, you should know that to fix an issue in Drupal core or contributed modules, you must submit a patch to an issue in the issues queue. These patches are then examined and tested by the module maintainer and applied if found beneficial.

This is a revised version of the article. We’d like to thank Anktiha Shetty and Pratik Kadambari for all their great inputs!

There are different ways to apply a Git patch. Let’s learn more about various Git Diff commands and how to create/apply a patch with the help of Git diff and Git apply. We will assume that you have already cloned/obtained a copy of the project in your local repository and have pulled the latest changes so you’re not working on an older version of the project. Take a look at some Github best practices here.

What does the Git Diff command do?

Git diff is a command to output the changes between two sources inside the Git repository. The data sources can be two different branches, commits, files, etc.

The common use cases of git diff commands are listed below.

This command will output all the modified changes which are not added to git or staged. 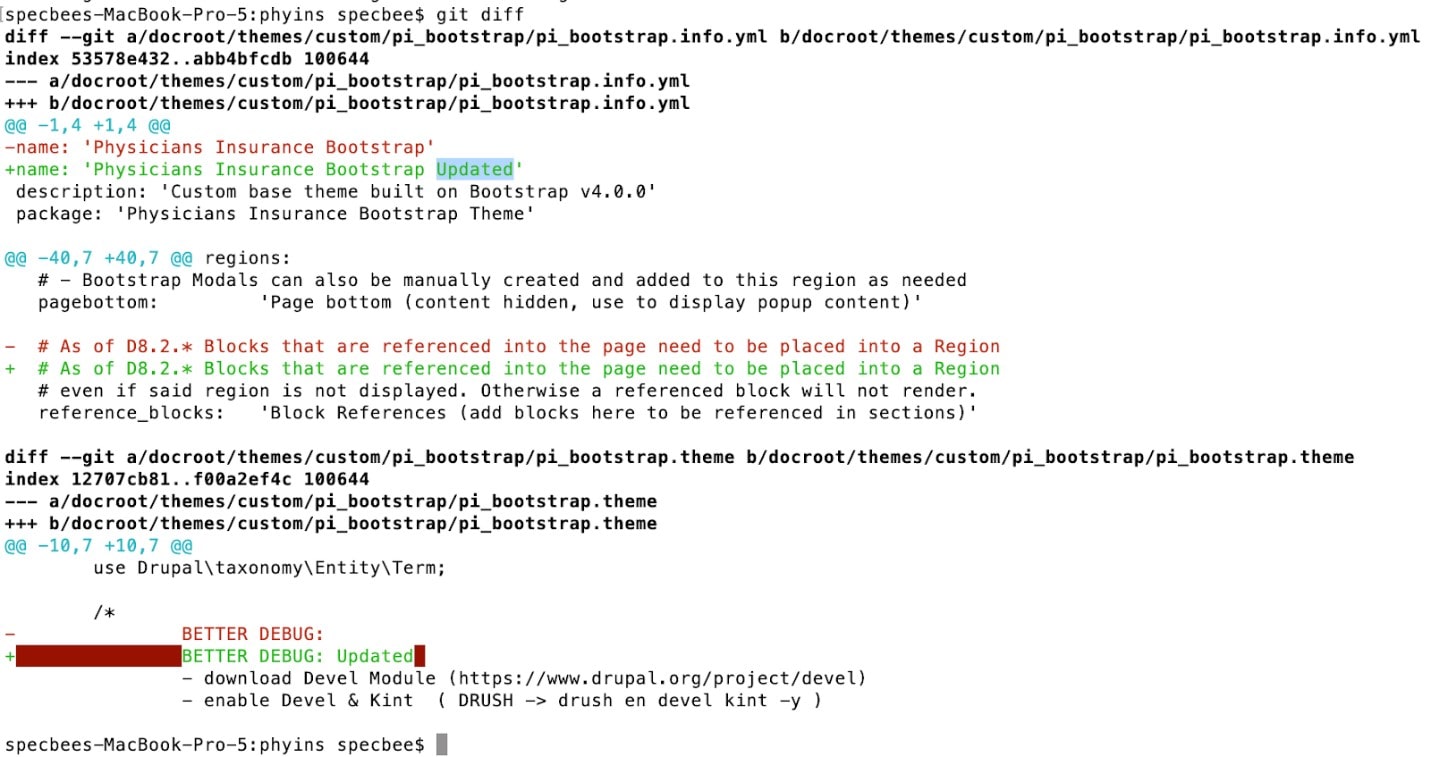 This will output the changes of that current file to its previous committed state.

This will output the modifications of the current branch to the mentioned branch to its previous committed state. 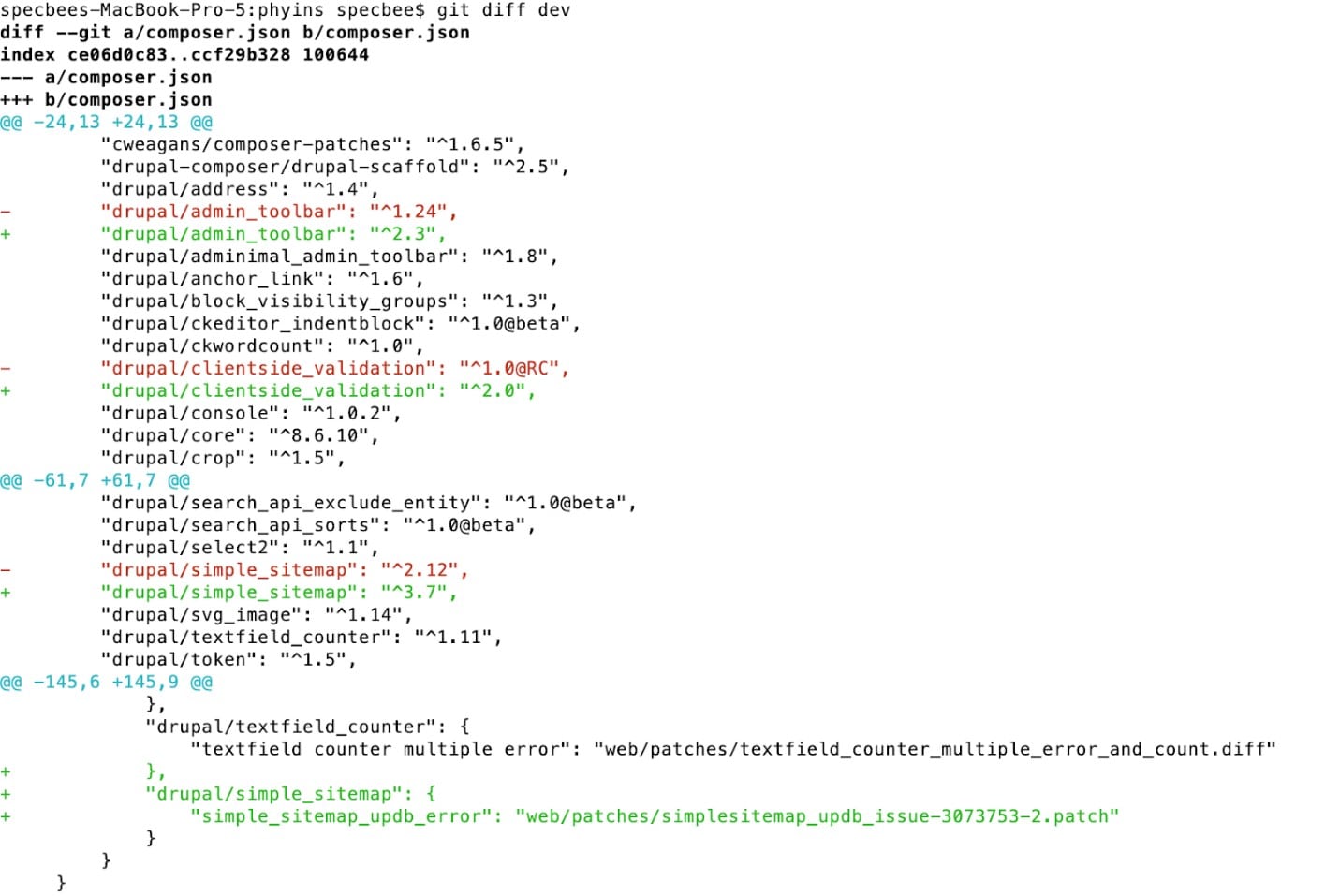 Once the changes are added to Git or moved to staging, you will not be able to see the diff of the files. To see the staged changes, you can use diff with –staged or –cached option.

To see the changes from both staged and unstaged changes (not untracked files) together, you can use the git diff HEAD command. If you have all changes staged for commit, then both commands i.e., –staged/–-cached and HEAD will output the same.

To see the difference between any two commits you can use this git diff command where you need to mention the two commit ids.

If you want to see the list of commits made in the Git repo, use the command $ git log. This will list out all the commits (starting from the latest commit) along with their respective commit ids, the author (developer) and the date it was committed on.

To create a Git patch, we can use any of the git diff commands to get the changes. We then need to save the changes to a file which can be used as below.

Drupal developers will want to apply Git patches frequently to update changes or to fix bugs. Developers will create a patch file that can be used by other developers according to their needs. To apply a git patch to the current branch use the following command.

Try the above command with the -v or –verbose option. It will cause additional information about the current patch being applied to be reported (as shown below).

Use –whitespace option to handle such situations.

Here the patch is created accidentally with trailing whitespaces (as shown below).

If the patch is applied as is: $git apply patch_file.patch
The patch will be applied (with whitespace warnings) and will still retain the whitespaces which can cause linting errors.

2. Checking the patch before applying

To check before applying the patch, use option –check
The command will show no warnings and errors if the patch is applied cleanly.

3. To see file statistics before applying the patch

Use –stat option with the git apply command. It will list all files which will be changed upon applying the patch.

The patch will only show information, and will not be applied.
To apply patch along with “stat” options add option –apply in command.

4. To apply only changes that are getting removed

Use Option –no-add with git apply.

Here only changes in red will be applied and green will be excluded.

5. Exclude and include the patch to be applied to selected files

Use –exclude option to exclude files from applying patch change.

Changes on other files, excluding mentioned file, will be reflected.

Changes only on the mentioned file will be reflected.

There might be a situation when the developer does not have write access to the project but still wants to suggest a change or fix a bug. The best way to go around that is to create a patch file. And because patches are additions to the code, testing and reviewing them is easy. This brief guide aims at helping Drupal developers get more familiar with git diff and git apply commands to be able to efficiently create and apply Git patches as needed. Contact us to know more about how we can help you with your next Drupal website. Installing Drupal 9 on Windows Subsystem for Linux from Scratch How to Integrate Drupal 9 with Bitly for URL Shortening

Want to extract the maximum out of Drupal?
TALK TO US

Upgrading the web presence of IEEE Information Theory Society, the most trusted voice for advanced technology

Great Southern Homes, one of the fastest growing home builders in the United States, sees greater results with Drupal 9